Imagine a fantasy novel with a taste of Lord of the Rings, Narnia and Harry Potter. You might sense the influences 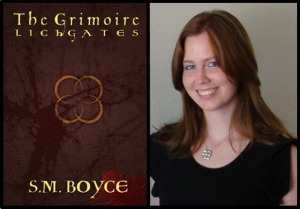 that must have guided debut author S.M. Boyce. From beautifully crafted descriptions and exposition to action packed thrills, it’s all there: fight scenes that work, magic, shape shifting creatures, time-shifts and a cast of likable good guys offset by terrifying opponents.

Main character Kara Magari stumbles onto an ancient book while hiking on a mountain trail. The talking book, the places it leads her, and the characters will transform her life. Kara is bright, witty and funny. To survive she will need all of those attributes and the help of loyal friends. Part of the problem is she can’t be sure who is friend or foe.

As the latest Vagabond, the World of Ourea is in her hands. It is said the first Vagabond was murdered for attempting to unite a shattered world. Now, Kara has the same assignment. 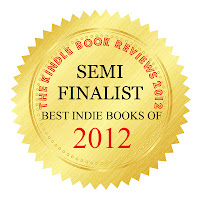 Shadows of the Realm Reviews and Thank-Yous

Shadows of the Realm Reviews and Thank-Yous.
A fantasy novel by Dionne Lister

S.M. Boyce created a magical fantasy adventure in The Grimoire Lichgates. Her protagonist is drawn into  a world reminiscent of the creations of Tolkein, C.S. Lewis and to some degree,   J.K. Rowling. At times frightening and at other times delighting, I’m confident you will enjoy the adventure.

How long have you worked on the Grimoire concept and novels?

I’ve been working on the Grimoire trilogy since I was sixteen, so 7 years. After years of plot development, character design, and half-finished drafts, I finally wrote the complete first draft for the novel in the early summer of 2011. It was released just this past October, but even after I wrote the first draft and thought that I had finalized everything, I would think, “But oh, wait! What if I did this, and then they went here?” and I’d change something.

…it’s amazing I published this at all, really.

What triggered the idea for the Grimoire series?

The Grimoire is one of those snowballs that started years ago and just sort of pummeled out of control. If anything, it is what it is today because I just let myself daydream about it. Virtually all of my notebooks eventually become sketch pads for character designs and plot points. It’s one of those consuming ideas, and I let my mind run with it.

What is your character development process?

My characters develop in layers. First, I look at who is needed to further the story. Do I need someone to take the main character somewhere? Does someone need to get in her way, or reroute her?

After I’ve looked at the basic “why” of a character’s purpose, I get to do the fun part: make them real. I design their character around the life they would be living in the world I created. Do they have family? Are they married? What are their hobbies? While I rarely tell readers all, if any, of this, it defines who this character is and makes them real. It gives them motivation and a personality, and it helps me to define their flaws and strengths. I design their dialect, fears, loves, and more to make them a real person and not just a character.

How about world building?

This is where my overactive imagination kicks in. I take a lot of inspiration from the natural world, because Earth is actually a pretty awesome place. Then, I exaggerate it or let my mind wander with “what if…?” questions. Why shouldn’t there be a floating city in the clouds that never stays in one place? What would an underwater city look like, and how would its people act? What if there were whole worlds hidden on the other side of a gate?

What are you doing to let people know about your new novel?

I started this really fun blog  for the Grimoire books. It’s essentially an online Grimoire, with excerpts, character art, character sketches and backstory, and even short stories and deleted chapters from the novel. The adventure doesn’t have to end because you close the book, right? Check it out. Here’s the new Book Trailer

Buy your own Grimoire!

I’m also giving away a ton of copies of the book. This December, I’m participating in a holiday blog hop and I’m giving away a signed copy to one lucky winner. To enter, sign up for my S.M. Boyce blog and I’ll send out the notification on December 30.

I’m also doing a slew of giveaways In January in various states through the Big American Giveaway program. Head over to bigamericangiveaway.com to sign up and get alerts for your states.

The Big American Giveaway program is a pretty neat idea…every day, different businesses will be giving away different deals in every state. Just head to their website &  sign up to get daily alerts with what’s going on in your state, and if you like something, all you have to do to enter is mess around on Twitter and Facebook for a few minutes. It’s a pretty sweet deal.

I’m giving away 1 book a day in these states:

What’s the next step for you?

I’m working hard to write the next two books and wrap up the trilogy before I start to work on other story ideas that have been stewing in the back of my mind. I’m hoping to have both books out by next year, though I don’t know when exactly they will be ready. If you sign up for the Grimoire Blog email digest, you’ll be the first to know!