Autism 101: What The Rest of Us Need to Know

I want to take this opportunity to welcome Bobbi Sheahan and Kathy DeOrnellas, Ph.D. to present a carefully prepared introduction on autism for the rest of us. This should come as a welcomed post to my followers, many of whom take an active interest in Autism Spectrum Disorder and

Asperger. This is a cause I have taken an active interest in for several months. I consider this to be a special presentation.

Thank you for sharing Bobbie and Dr. DeOrnellas!

Thank you so much, Rich Weatherly, for asking us to guest post on your blog!  My name is Bobbi Sheahan, and I appreciate the opportunity to talk to your readers about autism.

Ten years ago, when I got married, I knew next to nothing about autism.   Sure, I’d seen Rainman, but I’d never met someone with autism.  Well, that’s not exactly true, but I didn’t know it at the time.  You see, ten years ago, as I mentioned, I was getting married to my dear husband who is, as it turns out, on the autism spectrum.  His Asperger traits are a huge part of what makes him a wonderful husband and a successful engineer, but I’m getting ahead of myself.

My husband wasn’t the one who introduced my family to autism.  Two other people did that:  our daughter, who is also on the spectrum, and Dr. Kathy DeOrnellas.  Since I can’t bring each of you to her to hear Dr. DeOrnellas speak – and I would if I could —  I’m bringing her to you.   I’ll let her have the floor for a while now, so that she can explain to you some basic definitions about autism.

Autism spectrum disorders (ASDs), or Pervasive Developmental Disorders, are the fastest growing class of developmental disabilities in the United States and currently affect over 1.5 million Americans (Autism Society of America [ASA], 2009). In 2007, the Centers for Disease Control and Prevention determined that the prevalence of autism is currently 1 in every 94 for boys and 1 in 150 for all American children (ASA). More recent studies have placed the numbers as high as 1 in 91 children overall, and 1 in 58 boys.  This phenomenon has been widely discussed on television and in the press (Cowley, 2003).

Despite the vast amount of research being conducted each year, there are many different theories and a lot of disagreement on this topic, and it seems that each week brings news of breakthroughs in our understanding.  I do believe that there will be clear and widespread understanding of what causes autism in the foreseeable future.  Causation of autism isn’t what we’re here to explain today, though.  Today, we’re here to explain a bit about what autism is – and what it isn’t.

It’s important that we understand more about autism because it impacts all of us.  Almost everyone knows someone with autism, and it has an enormous impact on families, school systems, and communities.   Whether you’re trying to understand your nephew or a child in your daughter’s class or you’re a businessperson trying to understand how to accommodate people with autism, autism touches your life – or it will soon.  The economic impact of autism – which I use because it demonstrates how impactful autism is to families and communities, and money is easy to quantify — is now just beginning to be well-understood as well.   The Autism Society of America estimates that it costs 3.5 to 5 million dollars to care for a child with autism over his lifetime; the United States spends almost $90 billion each year for autism. This figure includes research, health care, education, housing, transportation, etc.

Much attention is currently being given to “Aspies” in popular culture.  There are several current television shows with characters who are supposed to represent various autistic traits – with varying degrees of accuracy and dignity.

ASDs, also known as Pervasive Developmental Disorders, are diagnosed by comparing a child’s behavior (or the behavior of an individual at any age) to a set of symptoms that have been established as the diagnostic criteria.

Autism Spectrum Disorders (ASDs) fall under the umbrella known as Pervasive Developmental Disorders. Several types of ASDs have been identified, and it is most helpful to think of them as falling on a continuum.

In the United States, the Diagnostic and Statistical Manual of Mental Disorders-Fourth Edition-Text Revision (DSM-IV-TR; American Psychiatric Association, 2000) is the most widely used set of symptoms. The DSM-IV-TR is a sort of encyclopedia of mental health disorders. Psychiatrists write the DSM-IV-TR and use a medical model for interpreting behavioral symptoms of mental health problems. It is important to know that this is the fourth edition of the Diagnostic and Statistical Manual of Mental Disorders and the diagnosis of autism has been handled differently in each edition. As we learn more about a disorder, changes are made in the diagnostic criteria.  The new diagnosis book, the DSM-V, is scheduled to be released in 2013, and it may bring substantial changes that will probably result in a narrowing of the diagnostic criteria and the number of people receiving a diagnosis of autism under the DSM-V.  Outside the U.S., the ICD-10, the tenth edition of the International Classification of Diseases, which is published by the World Health Organization, is used. Since autism is diagnosed in individuals all over the world, it is important to recognize that the DSM-IV-TR is not the only tool used for diagnosing individuals.

What Autism is – and what it isn’t

Autism is at one end of the continuum and is the most severe type of ASD. Children with autism have unusual behaviors that are repetitive and stereotypical, as well as very restricted interests and activities. They have severely disordered verbal and nonverbal language and as many as half never develop any type of language. Autism is also characterized by impairments in social interaction that include poor eye-to-eye gaze, lack of social or emotional turn-taking, and a failure to develop relationships with peers.  Most children with autism also have delayed intellectual abilities (DSM-IV-TR, 2000).

On the other end of the autism spectrum or continuum, children with Asperger’s Disorder generally have age-appropriate expressive and receptive language skills and average intelligence or above. They have difficulty using and understanding nonverbal behaviors, however, and their pragmatic language skills are typically impaired. As a result, social interactions are quite difficult. Children with Asperger’s Disorder typically have an overwhelming preoccupation with one or more topics (i.e., dinosaurs, skyscrapers, Egyptology, etc.) and are inflexibly bound by routine. They may have stereotyped mannerisms and/or a persistent preoccupation with parts of objects. This form of ASD also appears more frequently in males (DSM-IV-TR, 2000).

Other forms of autism include Rett’s Disorder, Childhood Disintegrative Disorder, and Pervasive Developmental Disorder Not Otherwise Specified. The diagnosis Pervasive Developmental Disorder Not Otherwise Specified (PDD NOS) is given to those children who have some symptoms of an ASD, but not enough for a full diagnosis. The diagnosis of PDD NOS, also known as atypical autism, is used when children have unusual symptoms or when their symptoms become apparent at a later age than is typical (DSM-IV-TR, 2000).  If you’re picturing a spectrum, PDD NOS is in the middle.

Much of the literature and discussion about autism deals with children with autism.  It is good that people are starting to pay more attention to adults on the autism spectrum too.  Although many people do change over time or improve in some ways – sometimes substantially – autism isn’t something that you outgrow.  Adolescents and adults have ASD and it affects their lives just as much as it can for children.

As you can see, Dr. DeOrnellas has helped me to understand quite a bit about autism.

This is the first of a two-part series.  In our next article, we will talk about safety concerns and introduce you to some of the more dangerous behaviors associated with autism.

Poem for an Autistic Child

A Tribute to August

from “The World According to August — 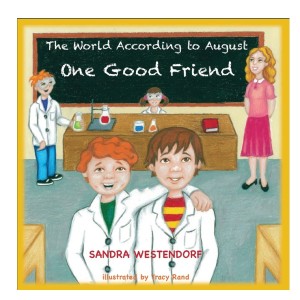 One Good Friend”
by Sandy Westendorf

To soar on wings of eagles

to glide along the glade

to bounce and jump and whirl and twirl

to dream and search and sway.

He has so much in common

with you and me you see —

who senses all with clarity.

To hear, to see and touch and smell,

he takes all in so well,

his self expression is unique

his feelings hard to sell.

but one can never tell.

and that works out quite well.

August has needs and we have ours,

life comes with give and take ―

love and comfort, peace and joy

A smile, a doubt, a look askance

He needs hugs and love at times,

same as you and I.

He gazes on the sights nearby,

is stirred by beauty there.

if only he could fly.

Unspoken words may bite his tongue,

but thoughts within belie.

A word from Mom, a smile from Sis

unspoken things give him answers to why.

Show him love and friendship now

Don’t ever leave just stay nearby,
he just might make you cry.

August is a special child

and August needs a friend.

August is a special child

And August is my friend.

For more information about autism and “The World According to August – One Good Friend” by Sandy Westendorf  refer to http://purplebirch.com/books.html .

Sandy managed a team of behavioral specialists and is the mother of an autistic child. According to Sandy:

Every child is unique; the extent to which they are affected is also individual. If you are not living with autism, it is easy to miss the child and only see the diagnosis.The aim of this book is not to speak to autism as a disorder or to define it; there are many excellent references which address those specific topics…

The book was written in an attempt to demonstrate, although outwardly,
these children may appear different; but inside—where it counts—they
are the same as you or me.Children with autism love, have an ego,
feelings which can be hurt, a sense of humour, and even a mischievous side.

I heartily encourage you to support research into autism by purchasing this book.  A percentage of the proceeds will be donated equally to support Canadian-American Research Consortium (Autism Research) and the International Society for Autism Research.