Autism Follow-up: Wandering and Other Dangerous Behaviors in Autism

I’m honored by the return of Bobbi Sheahan and Dr. DeOrnellas. In this post they have agreed to share insights into  behavioral risks associated with Autism.

Wandering and Other Dangerous Behaviors in Autism 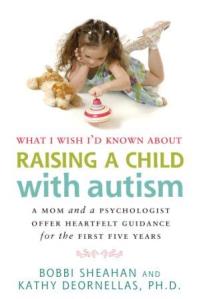 Thanks you, Rich, for having us on your blog!  We are back for part 2.  Our first segment was an introduction to autism. In Part 2, we are going to discuss some dangerous behaviors that are often part and parcel of raising a child on the autism spectrum.  Many of these are things I (Bobbi) would never have imagined before having an autistic child, and I have a pretty good imagination.

We’ll start with one of the more alarming behaviors sometimes exhibited by children with autism:  wandering or running.  We expect toddlers to take a run, if you will, at running away from Mom or Dad.  When a child has autism, that phase can go on for year after hair-raising year.

One mom, let’s call her Oona – has an elementary-school-aged son who has given her more than a run for her money:

“He would run out the door, in the street, thru parking lots, down the block, away, away, away. We had to install key-to-key deadbolts & flip-locks on all of our doors. We got handicap parking tags so we could park right next to the door. And sometimes I made him wear a strap from my wrist to his or from the shopping cart or stroller to his wrist. It was horrible & terrifying having to always be worried that someone forgot to lock a lock & he could be two blocks away at any time. On top of the running, he had absolutely no fear/safety boundaries. He would run into traffic or stop & talk to *anyone* telling them within minutes that they were his best friend & he loved them. Very scary stuff.”

I can relate to the Extreme Locks – I have had friends actually laugh at our locks and alarms, and the one on our front door actually once foiled a burglar (!), but Oona risked the scorn of the community – and certain members of her extended family — by taking the Next Step and using a leash.  I asked her how that was received. She said:

“I never got a ton of questions, usually just the sideways looks. Right after diagnosis, I was happy to volunteer answers to the looks – “he has an autism disorder, he runs away”. Later, I just stopped caring what people thought. I don’t have the time or the patience any longer to explain to everyone that I’m not a horrible parent.  I did get comments from my family (who do not understand his diagnosis & what it means for him, or care to educate themselves) like “a leash?!” or the ever popular & interchangeable, “Bring him to my house, I’ll straighten him out” & “you just need to spank him more” (typically said much more crudely by my mother-in-law as “beat his a**” – lovely).

Stories like this make me less likely to judge.  I certainly did judge myself a lot when my own child showed tendencies to flee.  My daughter’s running phase lasted for four years.  Four. Long. Years.  I remember vividly the day that she stood transfixed, staring at an open gate, repeating the cautions I’d been saying to her for years.  I admit it – I cried.  For joy, for relief, and for finally being able to laugh about the time she escaped on a tricycle and took years off the end of my life.

But wandering is no laughing matter.  According to multiple press and online reports, one father in Canada experienced the nightmare of having his nine-year-old daughter wander from their fenced yard, only to be found some hours later in a neighbor’s yard; authorities subsequently took the girl from her father’s custody based on this incident, according to this source http://www.autismkey.com/child-with-autism-taken-by-authorities-ayn-van-dyk/ and scores of others like it online.

What Can We Do About Running?  It took our family several years to instill the “do not run away” message, and it will take some folks even longer.  What can parents do in the meantime?  Besides the aforementioned locks and other physical protections, some families employ personal GPS monitors or autism service dogs who are trained to stay with the children and whose leashes are also snugly attached to the child’s wrists.  The question of why our kids wander is a tough one and beyond the scope of this article, but some folks say that the service dogs may also alleviate some of the anxiety that leads to wandering.

Police departments in the U.S. also have free biometric registries where you can provide your child’s fingerprints, pictures, and some basic information.  Many of us also have medical alert bracelets for our kids.  Special Education classrooms often have an aide dedicated to watching the doors, and I spoke with one mom who rejected an otherwise good school solely on the grounds that the front door opened up onto a busy parking lot and an even busier street.

The National Autism Association has a wonderful twelve-point list of action items to address safety concerns.  The list, which can be found in its entirety here, http://www.autismsafety.org/prevention.php?way=12  , includes several of the items mentioned here, plus some others such as designating an Adult In Charge at gatherings so that it’s clear that someone is watching our kids.

Wandering isn’t the only danger that our kids can get into. Jenny Herman, who is the Social Media coordinator for Home Educating Family and blogger extraordinaire at www.manyhatsmommy.com, tells the story of her son’s penchant for underdressing:

“The other day Josh and a friend left the apartment ahead of another mom and I. They went down the hall and out the door. They were waiting next to the friend’s van, but Josh was in shorts and NO SHOES in 30-something degree weather!”

Jenny also had a lot to say about property damage, inflicted with objects that could also be dangerous to life and limb:

“Josh has an obsession with using a tack (push pin, whatever you want to call it) to dig in the wall. He has many dime-sized holes around his room. In this incident, I came in to check on him, and he was digging at the wall next to the night light with a tack to “let more light into your room, Mommy.” At that point, he had only taken off the white paint and you could see the brown covering of the sheet rock (or whatever it is).

This FOOLISH mommy did not cover up the spot. Six weeks later, he came out to tell me he was having a hard time sleeping. Then he told me his body just had to carve something. I went into his room, and there was sheet rock dust all over the wall, the night light, his radio, and the floor. His toy screwdriver was on the floor. He had used his toy screwdriver to dig THROUGH the wall, a Real Live Hole in the Wall, as in you could see the dark space in between the walls. I said, “What did you use to dig that hole?”

“GLASS! What glass?” trying not to jump out of my skin.

“The glass that was by the ladder.”

He had no cuts or blood, so I think he found a piece of plastic that looked like glass. I covered the hole w/paper and masking tape and amazingly nothing more has happened there. However, he cannot leave the wall alone! I’ve found other small spots…

Jenny also shared this photo with me – which I hasten to add does not reflect any physical injuries to her son –but I won’t even ruin it by attempting to caption it. It’s already well over a thousand words, I figure:

The lack of caution that we see in some kids definitely extends to safety concerns around water.  Erin McMinn Nieman, in her blog called Noah’s ARC, tells the harrowing story of her son’s close call in “Mothers’ Day Under the Sea,”  http://www.noahs-arc.com/archives/972   Her story of her son’s plunge into a murky lake and her quick rescue of him is harrowing, but what really resonated with me was his response to being saved from drowning:  “Noah walked happily on, holding my hand as if nothing had happened.”

These stories highlight the importance of safeguarding our children.  While these stories may be amusing to someone who did not experience them, our children are in significant danger and have a much higher risk of engaging in dangerous behaviors that result in an injury.  They are more likely to suffer head injuries and to poison themselves accidentally; they are also more likely to end up in hospital emergency rooms.

This is true for several reasons. Many children on the spectrum do not experience pain the way the rest of us do and, rather than learning that the stove is hot on the first trial, they touch the stove again and again.  They also do not understand that certain situations are dangerous.  For example, our children may not understand that running out into traffic can result in injury or death; rather, they are focused on escaping an uncomfortable situation.

While all children are impulsive at times, children on the spectrum are especially so and do not think through the consequences of their behaviors. As a result, they can end up in some precarious situations. Although keeping our children safe can be very difficult, it is critical. I suggest that in any situation you have a “designated watcher” for your child – someone who is responsible for seeing that he or she remains safe. This is especially important in crowds, unfamiliar settings, or anywhere your child feels uncomfortable.

12 responses to “Autism Follow-up: Wandering and Other Dangerous Behaviors in Autism”