Welcome to My Place. I’m eager to hear what you have to say about your writing in general and about your novel,

It’s 1876 and Colum McNeal’s immigrant Irish father has sent gunmen to kill him. Colum finds a refuge in a hidden Texas valley and begins ranching, but struggles to stay there: José Ortero, a Jacarilla Apache, seeks revenge for the son Colum unwittingly killed.

At the same time, an old acquaintance, Mason Lohman, obsessively stalks Colum through the border country. Colum has inspired the unthinkable in Lohman. In a time and place where a man’s sexuality must stand unchallenged, Colum has ignited Lohman’s desire.

Other characters include Texas Ranger William Henry, who takes Colum’s part against his father while wrestling with his own demons. Comanches murdered Henry’s family and Henry regrets the revenge he took; and Clementine Weaver, who defies frontier prejudice by adopting an Indian baby. Clementine must also choose between Colum and her husband.

One thing I noticed about Scalp Mountain was the depth of your character development.  Tell us how you chose your main character and describe how you like to present your characters to the readers.

When we writers (including you, dear Richard) write books, we are just reproducing our brains. Therefore, readers aren’t really reading printed words on a page, they’re reading other personalities. That’s one of the reasons reading is so thrilling and why it’s so important for writers to accurately reproduce their “voice.”

Colum’s mother was murdered and his father rejected him. That kind of trauma usually twists people; it creates drives and motives they don’t necessarily understand. Humans must attempt full consciousness to understand themselves (I know, that’s a tall order). Luckily for Colum, when events unfold, he’s willing to face his actions and try to redeem himself. You can attribute that to inner strength, but I think God is willing to give us grace to deal with life, if we’re willing to accept it.

I don’t know, I don’t even know if it does stand out. I just wrote the story in my mind and heart, and wrote my style, whatever that is. I’ve studied literary technique, but that technique is mandatory for all writers, not just historical novelists, or literary novelists.

How does your main character’s profession draw him into suspenseful situations, (murder, for instance?)

It doesn’t. The events in the book all stem from character. Character is destiny. Colum’s father is a vengeful man. Rather than fight it out, Colum runs from his own guilt, motives and feelings. Lohman can’t handle his unrequited desire for Colum and tries to eliminate the problem the only way he knows how; killing him.

Have you considered working on a sequel?

No sequels. I’m working on another historical novel now and that has my attention. Besides, Scalp Mountain doesn’t lend itself to sequels. It’s pretty intense and I could never reproduce the same kind of tension in a sequel.

Tell me something about your writing habits. Is there a special place where you live that you like to go to? Do you like to write at a certain time of day?

This is a problem all writers deal with (unless they have superior self discipline, which I don’t). Between working on publicity, which is an endless job, doing my chores, seeing and talking to friends and family, and making myself stay in the chair, it’s hard. Like all writers, some days I just sit and stare at the computer screen and want to bang my head against the wall. Luckily, the wall is handy, it’s right by my desk.

In an added note, I strongly suspect writers who brag they have unbreakable work habits are exaggerating.

Please provide links to your blog, your book and other places where readers can find your work. 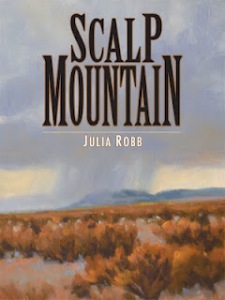 Thank you, Julia for stopping by. Do you have anything else you would like to add related to your book or writing that I failed to mention?

L. R. W. Lee, Author
The Book and the Author
this is... The Neighborhood