It’s hard to believe that Veterans Day 2012 has arrived once again. Traditionally, it is observed on the 11th hour, of the 11th day of the 11th Month in honor of Armistice Day which commemorated the end of World War I. President Woodrow Wilson proclaimed the first Armistice Day in 1918:

“To us in America, the reflections of Armistice Day will be filled with solemn pride in the heroism of those who died in the country’s service and with gratitude for the victory, both because of the thing from which it has freed us and because of the opportunity it has given America to show her sympathy with peace and justice in the councils of the nations.”

In Australia, Britain, Canada, and South African it is celebrated as Remembrance Day. It is so honored by other members of the Allied Powers in Europe and around the world.

I am old enough to have known veterans of WWI, WWII, the Korean War (officially called a conflict), Vietnam War, and every war since. There are far too many engagements to mention that qualify former service personnel for the Expeditionary Medal which is the standard for recognition as a war veteran.

We celebrate Veterans Day to honor those who served to defend our freedoms. Former President Eisenhower may have said it best.

“I hate war as only a soldier who has lived it can, only as one who has seen its brutality, its stupidity.”

Those of us who have served did so out of a sense of duty and honor. In my lifetime I have celebrated Veterans Day with my maternal grandfather a WWI Army Air-corps vet, my dad a Pearl Harbor Attack survivor, uncles who served in Army during WWII, cousins who served in Korea, a multitude of Vietnam survivors and nephews and children of friends who have served in the wars since Vietnam. Let us all take a moment this weekend to reflect on those we have lost, thank those who have served and show them the honor they deserve.
Check with local event schedules this year. While Veterans Day happens this Sunday, November 11th, it is being observed in my community on Nov 9. It will be recognized as a national holiday on November 12th, 2012.

My heart goes out to those who have lost friends and loved ones while serving this great nation and to those representing our Allies. 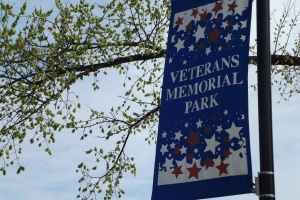